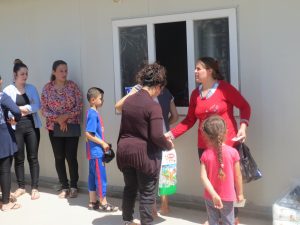 Mothers and children waiting in line for diapers.

We are currently in our second diaper distribution of the year! Our ministry partners in Iraq are continuing to roll out diapers from our first distribution. This month already, five more Christian refugee camps received diaper and sanitary pads.

On June 16 in another area of Iraq, 55 Christian families in a refugee camp received two packs of diapers, totaling 110 packs. 104 packs of women’s sanitary pads were delivered along with 24 packs of adult diapers.

This month, Chairman William J. Murray traveled to Iraq to oversee the second diaper delivery of the year. This month, 160,000 diapers will be delivered to Christian refugee camps across Iraq along with adult diapers, feminine hygiene pads and other basic food or hygiene staples.

In order for a family to receive diapers, they must present a government-issued identification card that has the child’s name, picture and birth date on it. Each child and family is put on file for the next delivery. This helps keep the distributions running smoothly and efficiently.

To find out how you can help these families, click here. Scroll through pictures of our first delivery below!

Your post cards and calls to Congress did the job! HR-390, the Iraq and Syria Genocide Emergency Relief and Accountability Act, was introduced by our friend Congressman Chris Smith on January 10th of this year, shortly after the 115th Congress began its first session. Within a few weeks the Religious Freedom Coalition began to mail tens of thousands of letters in support of HR-390 to Americans across the country.  Each letter contained personalized post card petitions for these Americans to mail to their congressmen and Senators. 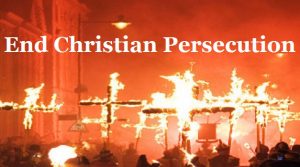 Since the first mailing in January, the RFC has mailed hundreds of thousands more letters containing post card petitions to build pressure on Congress. But by May there was still no movement on HR-390; it was being ignored by the Leadership of the House.

It was then that I began to publish the phone number of the House Majority Leader, Kevin McCarthy, and ask supporters of HR-390 to call his office to demand a vote on the bill.

Then on Tuesday, June 6th, I went on USA Radio news, which is heard on more than 500 stations in the United States, to explain the need for HR-390 and ask those listening to call Majority Leader McCarthy’s office, and I gave out his phone number right there on the air.

That very night the House Leadership moved the bill to the floor and passed it with an overwhelming vote!

The bill was placed on the floor for a vote under “rules of suspension.” A motion to suspend the rules can only be called on Mondays and Tuesdays and only be made by the Speaker of the House or their designee, which is usually the Majority Leader. Once the motion to “suspend the rules” is made, debate is limited to 40 minutes, no amendments can be made, and a two-thirds majority of Members present and voting is required to pass the motion.

To my dismay there was no roll call! The chair called for a voice vote and then declared that he had heard two-thirds say “yea”. There were no objections from any member, and HR-390 was on its way to the Senate.

But there is still work to do! Unfortunately, as of right now there is no Senate version of The Iraq and Syria Genocide Emergency Relief and Accountability Act.  In order to take advantage of this momentum, it is urgent you call your Senators at once, insisting they introduce and pass a Senate version of HR-390 right away!

Call (202) 224-3121 and ask the Congressional Switchboard Operator to forward to your Senators’ offices. Explain to the staff member in your Senator’s office why HR-390 is so important:

First, HR-390 will give assistance for victims of genocide

The bill directs the Administration to provide assistance to genocide survivors from Iraqi and Syrian religious and ethnic minority communities. Currently U.S. funds for aid to Iraq and Syria are given through the United Nations and the Iraqi government. Most Christians are not receiving this aid because they are not in the U.N. camps, where they are targeted for violence by Sunni Muslim gangs who control the camps. Christians often do not receive any “official” aid. H.R. 390 will fix that.

Second, HR-390 demands accountability for the perpetrators of genocide

HR-390 directs the Administrion to provide funding and support for entities that are conducting criminal investigations, building Syrian and Iraqi investigative and judicial capacity, collecting evidence, and preserving the chain of evidence for eventual prosecution. HR-390 also directs the Administration to review U.S. criminal codes to allow prosecution of Americans, or non-Americans present here in the United States, who may have been involved in the genocide of Christians or other minorities.  This is important because the Obama Administration allowed tens of thousands of Sunni Muslims to enter the United States from Syria and Iraq without proper vetting.

Third, HR-390 will give the victims of genocide priority refugee status

Right now 98% of the refugees admitted to the United States are Sunni Muslims.  HR-390 would give priority status to Christian refugees who are the actual