Iraq July mission: I have not been in Iraq since 2019. Although I have been to the Assyrian areas of Iraq before, I have not been there since we moved the Diapers for Refugees operation from Erbil to Duhok.

As of now I plan on visiting both Erbil and Duhok in July and of course will send a full report to you on what I find. In my past visits to Iraq I have reported on the damage done to Christian areas by the Islamic State invasion. Friends I have there lost everything, as their homes and businesses were destroyed. Rebuilding takes time and money. 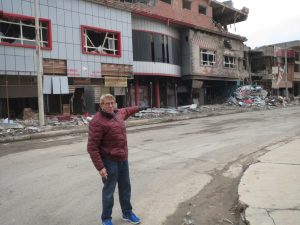 On my coming visit to the Ninevah Plain I hope to find Christian towns in which I saw despair brought back to life.

On this visit I hope I will be able to report on positive elements of reconstructing the Christian society in the Nineveh Plain.

Another of my main interests in Iraq is visiting the centers that need adult diapers for special needs. While many in need are elderly, there are also younger adults who received severe injuries during attacks by the Islamic State and are now not able to care for themselves.

Wars may end, but the human cost can linger for lifetimes.

All of our efforts in Iraq have been in Kurdish autonomous areas. While the governorates are Kurdish, they all do fall under the Iraqi constitution. Still, they operate as a separate area.

Although leaning more secular, the Kurds are almost all Sunni Muslim. There are extreme elements of the Kurds who do want Sharia Law. The use of the Kurdish language in the schools is also an issue for Christians who are either Assyrian or Arab.

Putting it bluntly: The Kurds are no angels, and they want the area to be Kurdish — not Arab, not Assyrian and not Christian. Right now, Christians are for the most part left alone because of all the aid flowing in from the West. When the aid dries up, the niceness to Christians will probably also dry up. In the past the Kurds assisted the Turks in the slaughter of Christians.