The Islamic State may be out of the news cycle, but the destruction and suffering they caused in northern Iraq continues. I visited Erbil and Dohuc and the Christian villages around Dohuc in July. The smaller Christian villages are poverty stricken and many of the jobs Christians held no longer exist. 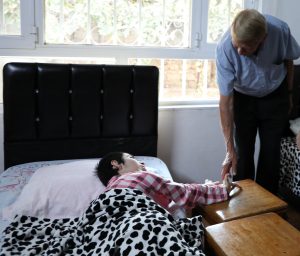 While in Iraq I prayed for many bedridden Christian adults who receive diapers from our programs.

Many of the elderly live alone or in group homes as younger Christians have been forced to flee. A large number of these elderly need adult diapers to live even close to normal lives.

When I began the Diapers for Refugees program it was strictly designed for infants and toddlers in IDP camps. (Internally Displaced People)

For several years, the program bought diapers in container lots for infants. The program has changed over time, first to supply pads for the mothers of those children and then to supply diapers for special needs adults.

As the IDP camps emptied out we continued to supply infant and toddler diapers in the most impoverished Christian areas. At the same time, the demand for diapers for special needs adults increased because injuries and untreated illness in elderly people increased because of the ongoing fighting caused by al Qaeda and then the Islamic State.

In poverty stricken Christian villages in Iraq I discovered many adults who have been unable to care for themselves since birth, some now in their thirties. Their parents are aging to the point of not being able to care for them. Some are in group homes with the parents.

The Diapers for Refugees program is now supplying 145,000 adult diapers a year to special needs adults at an average cost of sixty-five cents per diaper. Adult diapers cost many times more than what the infant diapers cost.

Only food is provided at the group homes and care centers for elderly and special needs adults. If family members are available and they can afford the diapers, they are expected to provide them. Many in these facilities have no families left to bring diapers for them.

Overall, the Diapers for Refugees program is providing just shy of one million diapers per year. The program is operating in Jordan, Iraq and in the West Bank towns of Bethlehem and Beit Sahour.

Bethlehem and Beit Sahour are no longer in Israel. During the Bill Clinton Administration they were transferred over to the Palestinian Authority. Almost immediately Christians faced pressures, particularly the ill. Our Heart for the Persecuted Church program not only supplies diapers but also food baskets to elderly who have no relatives and no means of income.

The United States is one of the only nations friendly to Christianity left in the world and that is beginning to change as “woke” is forced upon us all.