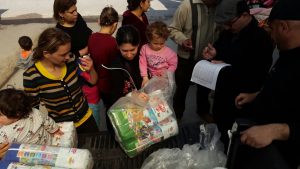 Displaced Iraqi Christian women receive diapers for their infants and toddlers, supplied by the Diapers for Refugees program

At the request of the Diapers for Refugees ministry partner in Iraq, the number of diapers for infants and toddlers was increased and additional help was supplied for women’s needs and the elderly.

The number of diapers purchased increased from 160,000 to 180,000. The number of families returning to their burned-out homes in Qaraqosh and other Christian towns made the increase necessary, as some families who used to obtain diapers from other sources in the Erbil area can no longer do so. You see, not only were the homes burned and looted, but so were all the stores and businesses.

The increase to 180,000 increased our cost for the infant and toddler diapers from $18,000 to $19,800. At the beginning of 2017 the Diapers for Refugees program was also supplying the mothers of the children who received the diapers with feminine pads. For December the need was increased to 2,000 packages. Those 2,000 packages will be distributed over a period of three months as our purchases are made in bulk every three months in Dohuk, Iraq. A dedicated truck brings the supplies to the ministry warehouse in the Erbil area.

In addition, the Diapers for Refugees program during 2017 supplied adult diapers to grandparents of the children who were in need of these. The families moving back to villages also increased the need for these.

Other ministry organizations and secular groups are supplying food and other aid to displaced Iraqi Christians as they try to rebuild their lives. Food is not enough. Their homes and businesses were looted by the Islamic State (ISIS). I have been in their homes and businesses in Qaraqosh the last time in June of 2017. Everything was stolen, even the electrical outlets were taken from the walls and then most of the homes were burned.

The local ministries run by Christian aid groups operating in the Nineveh Plain keep track of what is supplied. A lot of things that have not been requested and are not needed, such as used clothing, are sent from the United States anyway.

Diapers for Refugees, along with other projects of the Religious Freedom Coalition, first find out what is needed by the refugees — and then try to fill the need. For that reason, the Diapers for Refugees program was expanded in December to increase not only the number of diapers but the number of packages of feminine pads and adult diapers as well. 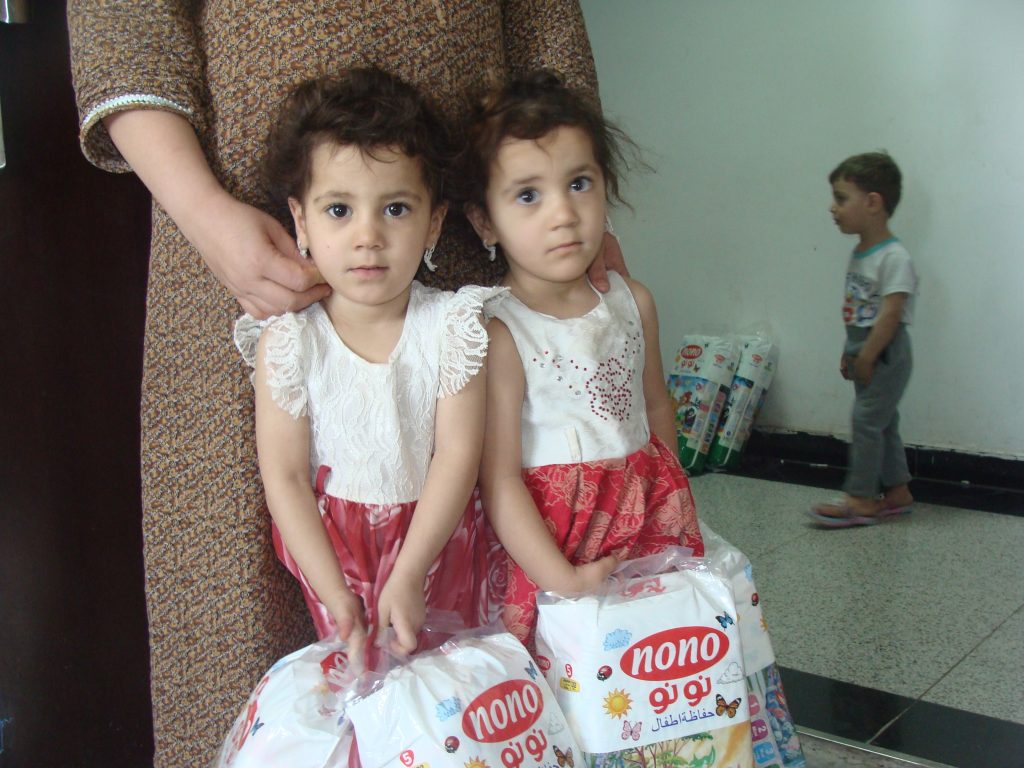 Girls hold diapers distributed by our Diapers for Refugees program

The general manager of the ministry that carries out our programs in Iraq is currently in the United States and may not be able to return to his base in Erbil except by dangerous means.

He and his wife (for security reasons I cannot use names) arrived in the United States on a special visa the last week of September. The purpose of their travel was to speak with the various ministries in the United States who support them and their organization in Erbil, which is located in the Kurdish region of Iraq.

While they were in Washington, DC I arranged an off-the-record meeting for Maher with an official with the State Department, and with other ministry organizations that can help them. I also arranged meetings with Senate offices on Capitol Hill.

On September 25th the Kurds held an “independence vote.” The Kurdish voters overwhelmingly voted to create an independent state. The reaction of the Iraqi government was to close the borders of Kurdistan and shut down airline operations into the Kurdish region including the Erbil airport.

Bottom line: The airline tickets they  have to return to Erbil cannot be used to fly to Erbil.

They can, at a cost, change the tickets to fly into Baghdad but then would have to make a very perilous journey of 400 kilometers from Baghdad to Erbil by ground transportation. Currently the routes go through areas that are not totally safe from Jihadists and bandits.

Please pray for Christian workers in Kurdistan and all the areas of Iraq. They work hard to minister to the persecuted Christians of the Nineveh Plain.

As of now I have no way to get into Iraq for Christmas.  Until now, I could fly directly into the Kurdish region without an Iraqi visa. Now, because there are no direct flights to Erbil, I would have to fly to Baghdad first, which would require an Iraqi visa. The Iraqi government is NOT issuing visas to those who state their destination is in Kurdistan.

Worse, the Kurdish and Iraqi armies that together were fighting the Islamic State are now squared off against each other in the oil rich Kirkuk Governorate. The Iraqi Army has already pushed the Kurds out of the city of Kirkuk proper. Please pray that this situation with the Kurds and Iraqis is resolved without a full-scale war in which the Christians will suffer the most.

As of today, we are still able to get supplies into Iraq from Turkey, but we do not know how long that will last. I have sent some funds to our partners in Iraq to purchase in advance some items needed for the Christmas program. We can probably obtain everything needed in the next few weeks except the food for the meals at the Christmas events for the children.

Please pray for the Christians of the Nineveh Plain, particularly the children who have suffered so much already.