Yara: The Stories of Those We Support

Follow along for a series of The Stories of Those We Support to get a new perspective of the Diapers for Refugees Program, first-hand from Christian refugees in the Middle East. 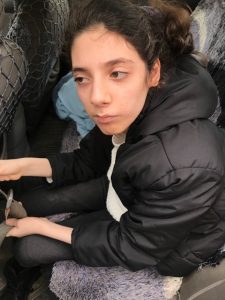 Yara xxxxxxxxxxx (14) has been displaced from the city of Qaraqosh with her family since June 2014 when they had to flee and take refuge in the City of Erbil after ISIS occupied their city. Yara has been paralyzed since birth due to damage of her brain cells as a result of a choking incident that occurred when she was born.  Her parents discovered this disease when she was just two months old. Since then, Yara has undergone various stem cell treatments that were unsuccessful. After asking her father what her daily difficulties are, he replied “Actually , one of her worst challenges that she is struggling with is she is unable to depend on herself to use the bathroom or even walk, so we carry her and it is not easy for us because she is grown up and heavy. Also, she cannot speak to express her feelings. Therefore, sometimes we cannot guess what she is going through or what her real need is. We are especially thankful for your willingness to help, please know that we deeply appreciated that you put in effort to cover our expressed needs and may the lord bless all the people who donated these useful supplies abundantly”.