Two million diapers in 2019:  More help is needed for Christian families on the Biblically important Nineveh Plain — not less.

There is no running water in many of the Christian towns on the Nineveh Plain. 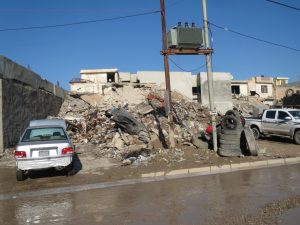 Two full years after liberation, areas of Qaraqosh still look like this. Note that the power lines actually are not connected to anything.

Their water came from the dam on the Tigris river near the major Iraqi city of Mosul. That was the largest Iraqi city held by the Islamic State and it took more than a year for the Iraqi Army and Shia militias to take the city back from the Sunni jihadists of the Islamic State even with nearly constant bombing by The United States and other Western air forces.

When I was in Iraq this past December, there were still craters in roads. While many of the bridges that were bombed by the Western Coalition to stop Islamic State movements have been rebuilt, there are still some bridges that are down making transporting water difficult.

It gets worse: As I have mentioned previously in newsletters the water from wells on the Nineveh Plain is as salty as the sea. The well water is not drinkable. Cloth diapers cannot be washed in well water as the salt will stay in the diapers and irritate babies, causing diaper rash. The whole purpose of our Diapers for Refugees program is to reduce or stop completely the problem of severe diaper rash that can cause bacterial infections. 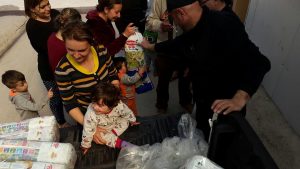 During 2018 the need for diapers increased as families moved away from aid centers and tried to move back to their looted homes.

As more families move back to Bartella, Qaraqosh, and other towns on the Nineveh Plain they receive less aid than they could have gotten in the larger city of Erbil.

Keep in mind that every Christian home was looted. The washing machines are gone as are the stoves, air conditioners, furniture and even the clothes and dishes.

Because of the images many Americans have of those living in the Middle East, I have to emphasize over and over again that these Christian families were almost all well educated and middle class.

The Christian families did not live in tents or huts, like the image many have set in their minds. Many of these homes were anywhere from 1,500 to 4,000 sq. ft.  and had tiled floors with full modern baths and kitchens. That is all gone, every bit of it.

I have been in these homes … before and after. I have enjoyed dinner in more than one Christian Arab home in the Middle East. I have met Christian men and women who are doctors, lawyers, and businessmen. Some were millionaires before the invasion.

I have also seen the jihadist writings on the walls of destroyed homes. I have visited the shops and even factories that were owned by Christians that now lie empty or in ruins.

There was a huge metal door and window factory at the entrance to Qaraqosh that now lies in ruins. All of the equipment was stolen and carted off to Turkey.

Currently the biggest industry in Iraq is demolition and the reprocessing of scrap metal and cement. Those are not great paying jobs.

And sadly, I must report that most of the wealthy Christians, those that were millionaires fled to Europe during the occupation by the Islamic State. They don’t plan on coming back. Without the wealthy the rebuilding process will be even slower.

Every dollar counts in a situation like this: This is why the Diapers for Refugees program is so important. Every dollar’s worth of diapers we can furnish to families in need is one more dollar they have to rebuild their shattered lives, one more dollar to help buy dishes or linens or a mattress to sleep on.

These are the reasons I want to keep the Diapers for Refugees program alive in 2019.