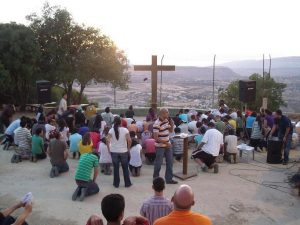 Christians wishing to flee the Middle East in search of asylum will not take first priority under the updated version of President Trump’s executive order on travel and refugees, which was signed Monday morning.

The new executive order does away with language about explicitly prioritizing religious minorities and loosens initial limits on who’s allowed to enter the US.

According to Christianity Today, “Current visa holders, refugees already granted asylum, and travelers from Iraq no longer face restrictions, and the indefinite ban on refugees from Syria was reduced to 120 days – same as the overall refugee population. The executive order goes into place next Thursday.”

Surveys have found that most self-identified white evangelicals approve of Trump’s temporary moratorium on refugees, but most evangelical leaders oppose it.

Tim Breene, CEO of World Relief, the evangelical refugee resettlement agency, said “The issuance of a new executive order on refugees and immigrants acknowledges that there were significant problems with the first executive order that caught up green card holders and others as they tried to enter the United States.” World Relief was forced to close five offices and lay off 140 employees after Trump’s decision to decrease America’s intake of refugees from 110,000 to 50,000.

Breene added: “However, this new executive order does not solve the root problems with the initial order—the cutting of refugee admissions by 55 percent and the inability for some of the world’s most vulnerable refugees to come to the United States. It is more of the same.”

“Trump’s new order considers “fear of persecution or torture” without explicitly calling out religious factors. The earlier one contained a provision to prioritize persecuted religious minorities once the refugee program resumed, and the president spoke in a TV interview about helping Christians in particular.

Nina Shea, director of the Hudson Institute’s Center for Religious Freedom, raised concerns that religious minorities in the Middle East need refuge more than ever.

‘There’s a dire need for President Trump to issue a separate executive order—one specifically aimed to help ISIS genocide survivors in Iraq and Syria,’ she wrote. ‘For three years, the Christians, Yizidis and others of the smallest religious minorities have been targeted by ISIS with beheadings, crucifixions, rape, torture and sexual enslavement …. The Christian community is now so shattered and vulnerable, without President Trump’s prompt leadership, the entire Iraqi Christian presence could soon be wiped out.’ …

‘How do we take care of our Christian sisters and brothers in Syria and Iraq? Have we stopped to ask them what that would look like?’ wrote executive director Jeremy Courtney following Trump’s first order. ‘I don’t mean just being a safe haven to run to when their churches and homes are destroyed by violence, but whether we as a nation are pursuing the policies and diplomacy that give them the greatest chance of surviving and flourishing where they are—so they don’t have to flee their homeland.’”