Jihadists threaten compound: The first June distribution for Diapers for Refugees was scheduled for June 16th and I was there at 9:00 AM despite not arriving from Amman, Jordan until 3:30 AM that same day. I was greeted with a threat. 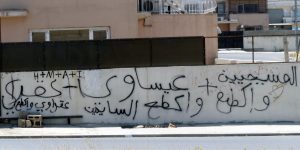 The Arabic says: “Christians and Christ men must be cut.” The term “Christ men” refers to preachers and priests, and the word used for “cut” clearly means beheading.

The first distribution was set at the Ozal compound that from the outside looks like a nice suburban neighborhood of attached homes, similar to what we call townhomes. But it is far from normal, as up to five Christian families live in each house. It was in this compound that one of our first Christmas for Refugees events was held in Iraq three years ago.

As our trucks entered the camp I noticed spray painted graffiti on the external wall. The Arabic was clear. It said: “Christians and Christ men must be cut.” The term “Christ men” refers to preachers and priests, and the word used for “cut” clearly means beheading. That was the greeting I received on my first full day back in Iraq to take aid to the persecuted Christians there.

The outward appearance of the area is one of serenity, although I doubt that inside the homes there is much serenity, with several families living in each house and using the same kitchen and bathroom.  All construction stopped on these homes when the ISIS army got to within 25 miles of Erbil, and some churches have been able to rent them for the refugees’ use. 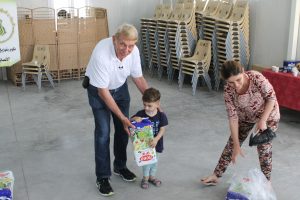 There are many volunteers for the Diapers for Refugees program. Many of the men who escaped with their families from the Nineveh Plain and Mosul have no work, and they do what they can to help. There is no shortage of labor to unload trucks or set up areas for distribution. On some occasions, husbands or grandmothers pick up the diapers for busy mothers.

Over the past year sanitary pads for the mothers and adult diapers for special needs elderly have been added to the program. The women are particularly thankful for the sanitary pads which are costly when not bought wholesale.

While the need for the adult diapers is not acute, there are some in the camps that do require them. Many times, elderly women are too embarrassed to request these and a daughter or son will bring her ID to the distribution to obtain them.

We purchase 160,000 diapers every three months from a supplier in Dohuk, Iraq which is about a two-hour drive from Erbil. Dohuk is a major city with a metropolitan population of well over one million and it is a distribution hub for goods manufactured in Europe and Turkey. The diapers we purchase are of a high quality and are made in Turkey.

The entire three-month supply is not delivered to a family at one time for several reasons including the ability to carry them home, and the fact that the children grow and needs can change from month to month. The diapers are kept in a dedicated sea-going container that has been converted for warehouse use.

Our program shares a warehouse area that is literally made up of containers stacked up on each other. Fortunately, our container is on the bottom and easy to load and unload. The diapers are all stacked by size in the container leaving a walkway to unload the appropriate sizes for each distribution. Distributions are done monthly at several different camps.