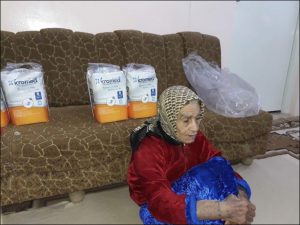 Special needs adult diapers: I received the first request for adult diapers in 2018. Our team had been so centered on the babies and toddlers and their needs that the idea of adult diapers had never been considered.

I did not think there would be a big demand for the adult diapers. I was wrong!

The percentage of older adults with special needs for diapers is far higher than in the United States because of the lack of medical care during war time. Infections that could have been cured caused damage that could never be undone.

Until I talked to some of those receiving the adult diapers, I did not understand how much lives were changed for the better by them. In many cases it is a matter of being able to sleep through the night. There were tears in the eyes of one man who told me how his life was changed by having the diapers. He told me he could sleep on a mattress for the first time in years!

The budget for the adult diapers just keeps growing and we are not even dealing with a large population. We are only supplying the needs of the Christian community on the Nineveh Plain. Our entire operation in Iraq is within 200 square miles. Our ministry partners in Jordan have been asking for assistance with the adult diapers as well. Again, the problems were mostly caused by lack of medical care. In Jordan the medical care was not available because of money. All the Iraqi and Syrian Christians are there illegally as refugees, and are not allowed to work. Most of those have no homes to go back to.

I do not want this ministry in the situation where we are able to do something one time and then never again. Promises should not be made if they that cannot be kept. We have been able to begin a small Diapers for Refugees program in Jordan targeting mostly elderly with special needs. The budget for 2019 is set, but we will try to do more in 2020. 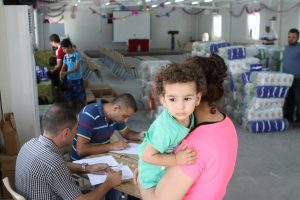 While many Christian refugee families are unable to fully provide for their children, the government and other global organizations do not provide support.

Babies still need diapers: It is just not right to ask a young married couple to not have children because they are refugees through no fault of their own, but that is exactly what the United Nations and USAID expects. The United Nations, USAID and the EU hand out condoms and birth control pills.

If the young families are expected to hold off having children until the society in Iraq and Syria is back to “normal” economically, then they will never have children. It will take Iraq at least 50 years to recover from the 2003 invasion; the uprising against the US occupation and then the war with the Islamic State.

Although it is no longer in the news, there is still fighting going on in Iraq. There are still pockets of the Islamic State (ISIS) and al-Qaeda.