My Observations of the June Diaper Distribution in Iraq

Distribution at four camps in June: During my inspection trip to Iraq, diaper distribution occurred at four locations. The camps served were:

Several videos of the distribution are posted at our website and our Facebook page for Diapers for Refugees. 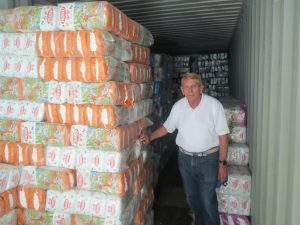 Chairman William Murray traveled to Iraq to help with the diaper deliveries and distributions in June.

Americans expect to see photos of people sitting in the dirt outside of a tent. Iraq is NOT a third world nation. Before the 2003 war it was a nation of divided highways and modern cities. Much of that was destroyed in the war — and then in the near civil war of 2006 after an initial pull-out of US troops. Things got better after President Bush did a “surge” of troops, but then came the Islamic State rampage in 2014. The goal of the Islamic State of course was to take Iraq and Syria back to the 6th century with “pure” Islam. The only “modern” things Jihadists are interested in are weapons of war.Of all the camps, the Ozal compound is one of the more unique. This is the compound where threats had been written against Christians on the wall at the entrance. Inside, the compound looks like a middle class residential area as I mentioned above. There are children on bikes and a few cars parked on the street. During the day when temperatures are well over 100 degrees there are few people on the streets.

The churches and Christian missions have done their best to normalize life for the many thousands of Christians displaced from their homes. That is what the diaper program is about – normalizing life for Christians as Iraq is rebuilding, even in a time of continuing war. Sadly, Christians are being left out of the rebuilding process.

The largest diaper distribution was at the Ashti2 camp in Ankawa, because it is the most concentrated. The compound is made up of hundreds of caravans that are 12 x 22 feet. The inside of each caravan contains just 264 square feet, divided into two spaces. One is a bedroom/living room for the entire family. About a fourth of the area is a small toilet and kitchen area with a partition. Up to eight family members live in one of these caravans, but the average family size is five.

An untrained eye looking at the caravans would think that they are air conditioned, but that is not the case. To cool the individual units, a sort of vaporizer is used. A hose from a water supply feeds cool water into the unit and then air is blown across or through it into the caravan. It is primitive, but compound generators would never be able to supply hundreds of air conditioning units

On days of extreme heat, I have seen men bringing a block of ice to their caravan. The ice is then placed in front of a small fan in an attempt to cool the caravan for their families. 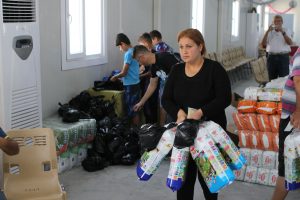 One of many young women who received a very welcomed supply of diapers.

At the Ashti2 compound we delivered diapers to 330 families. Hundreds more families  live there, but they do not have diaper age children.

The families in the compounds are desperate since most of the men are unemployed, and some will sell whatever they can get their hands on at the street stands. The diapers would bring needed cash to families if sold on the black market. For that reason, extreme care is taken to make sure that the families needing diapers receive them. We do not back up our truck and start handing out diapers to anyone that shows up.

A list is prepared in advance of families needing diapers,  from information obtained from the camp administrator. All   family members who come on site to pick up the diapers must show their ID as well as the child’s ID.

This is the same procedure used by all NGO’s to make sure that desperate people do not take what is being passed out — and then get back into the line again. It also stops panic among the families who may fear that the supply of whatever is being distributed may run out.  A compound or camp such as Ashti2 is always in a process of change. Some men manage to find jobs and move their family out, sometimes to another city. But new families from West Mosul that had been held captive by the Islamic State are just now arriving. And some women are wearing black from head to toe because their husbands who were fighting in the Iraqi Army have been lost.

The Rock Compound: The Rock is actually neither a compound nor a camp. It is three stories of an office and shopping complex in downtown Erbil near the Citadel. This building complex, which covers two city blocks, is owned by a Christian businessman. There are several hundred families living in partitioned off spaces, again about the size of a caravan. Diapers were distributed to 90 families at this location.  Parking and unloading is a huge issue. Although we prepositioned the diapers the night before, it took us nearly 45 minutes to find parking and make it up to the location.

In Ankawa, which is a Christian town adjacent to Erbil, the women and teenage girls can safely go out by themselves. However, in downtown Erbil, no Christian woman can go onto the street by herself unless she compromises her faith and wears a hijab. The Kurds are Sunni Muslims, and right now the Trump Administration and the media pump them up as true heroes and our great paid warriors against Islamic State. They are Sunni Muslims — not as radical perhaps as the Islamic State, but still, Christian restaurants were forced to pay a fee to stay open during the time of Ramadan when I was there in June. 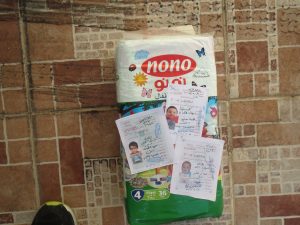 In order to receive diapers, proper identification must be shown.

The Qaraqosh Distribution: The last time I was in the Christian town of Qaraqosh, Iraq in late 2016, there were no families  living there as yet. By May, we had word that 345 families had moved there. By the time I arrived in Iraq the number had changed to 200. The living conditions are horrid, even though running water has been reestablished. Can you image living in a home with broken out windows in a neighborhood destroyed by war — with no neighbors for perhaps a block or more?

In Qaraqosh, diapers were delivered to those families who needed them. In addition, all of the 200 families were given two large heavy plastic bags each – one filled with food items and one with hygiene items. All items are top quality and known brands. Separately, a 4.5 kilo (9.9 pounds) bag of rice was also distributed. The bags of food contained staple items such as beans, sugar, salt, baking mix, coffee and cooking oil. The hygiene package contained detergent, soaps, shampoos,  tooth paste and brushes, as well as razors for the men and sanitary pads for the women. Multiply what you see by 200 … plus the diapers, and we needed two trucks.

Diaper deliveries to various camps and compounds are monthly. The diapers are purchased in bulk every three months. In all, 640,000 diapers per year are distributed.