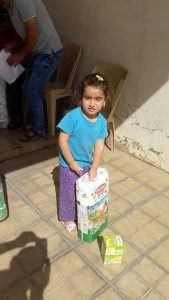 Christians face greater oppression today than under Saddam Hussain. Christian families in areas of Iraq controlled by the Islamic State were forced to flee their homes with infants in their arms and unable to take anything of value with them. These Christians who fled the Nineveh Plain and Mosul have little hope of returning in the near future and need our help.

While gifts of food and donated clothes are often adequate, the need for diapers has been largely unmet. Some mothers have used donated clothing in place of cloth diapers due to the extreme need. However, the lack of clean water and soap to wash these diapers has led to outbreaks of disease in babies and their families.

The first truckload of diapers in March 2016 gave nearly 300 families a large supply of diapers. The second distribution that took place in June delivered a shipment of 160,000 diapers of different sizes at seven different locations.

The Diapers for Refugees program kicked off its third delivery of 2016 in September. This shipment of diapers was delivered to displaced Christian families in the Ankawa-Erbil area, where we have several distribution sites. Just like the previous deliveries, the diapers were distributed to those with the greatest need. This month’s shipment was delayed due to Dhū al-Ḥijja, a Muslim holiday, causing a delay in the delivery.

Our goal is to provide high quality disposable diapers to over 300 Christian refugee families every three months in areas where cloth diapers cannot be cleaned and reused.

The diaper program has been very uplifting because we are literally changing lives with the program. Babies who were in pain with rashes and open sores, or who had no diapers at all, can now play and sleep in clean safe diapers. The mothers know other Christians care about their families. We would like nothing better than to continue the Diapers for Refugees program and expand it to more displaced Christian families in Iraq. Learn how you can help.