Our Diapers for Refugees project in Iraq conducted our second distribution of the year this month.  This shipment of diapers was  delivered to IDP Christians in the Ankawa – Erbil area in northern Iraq. As before, the diapers were distributed to those families with the greatest need. Ankawa is an almost 100% Christian city next to Erbil, the population of which has doubled since the fall of Mosul and the Nineveh Plains to the Islamic State. Most of the families live in single rooms not the mostly middle class homes they were driven from. 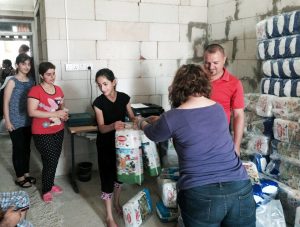 Diapers distributed to young Christian mothers at one of seven locations in northern Iraq. A total of 160,000 diapers were delivered

Pictured at right is distribution at Al Amal center in Ankawa.  Al-Amal Hope Center for the Displaced People of Nineveh is the official name of the building above. The several story structure was intended to be a hotel, but construction was stopped as the Islamic State came close to the city in 2014. The shell of the building is now used as a camp for displaced Christians who live on five different floors of the building.

During June in total there were 160,000 quality diapers of various sizes distributed to the displaced Christian families with infants and toddlers at seven different locations. Because of a lack of hot water and washing machines as well as an acute power shortage in the region cloth diapers for the time being are not a good option. 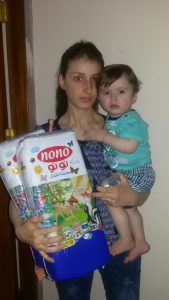 One of many young women who received a very welcome supply of diapers.

The Diapers for Refugees Program is are currently distributing five different sizes. Many women receiving diapers expressed their thanks and said it was a blessing from the Lord to have them.

Currently the Diapers for Refugees program is delivery 160,000 diapers every three months although monthly deliveries are planned funds permitting. The cost of a single shipment is $18,000 or just 11 cents each. As the Diapers for Refugees program is aided at Christians who have been declared victims of genocide by the United Nations, the United States and the European Union. All funds must be privately raised as officially the displaced Iraqi Christians are not considered refugees as long as they still reside in Iraq, even though they have been forced from their homes, have no jobs, and entire families live in single rooms or in tents.

The diaper program has been very uplifting for me because we are literally changing lives with the program. Babies who were in pain with rash and open sores, or who had no diapers at all, can now play and sleep in clean safe diapers. The mothers know other Christians care about their families. I would like nothing better than to continue the diapers for refugees program and expand it to more displaced Christian families in Iraq. Please pray with me that we will have funds for another shipment of diapers to families in Iraq in September. Learn how you can help.