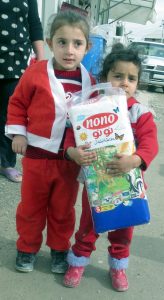 Two children pose with diapers given to their family.

In December, the Diapers for Refugees program delivered 160,000 more high-quality disposable diapers to the Ashti 2 refugee camp in Ankawa, Iraq. This marked the final delivery for 2016.

Earlier in 2016, the Diapers for Refugee program set a goal of delivering 640,000 diapers to Christian refugee families that have been ignored by the Islamic-run charities in the Middle East. Through your donations, the program successfully reached its goal.

In each delivery for March, June, September and December, 160,000 high quality diapers were distributed to Iraqi Christian refugee families, for a grand total of 6400,000. Disposable diapers are necessary because of the lack of facilities to clean cloth diapers in the camps. With prayer and help from Christians in the United States the program will continue in 2017. 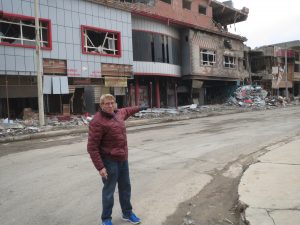 William J. Murray stands outside a building in Qaraqosh that had been destroyed by IS militants.

When ISIS took control of the Nineveh Plain in 2014, Christians were given an ultimatum: convert to Islam, pay a tax, or die by the sword. Many Christians fled their homes taking absolutely nothing with them. They were forced to leave behind the luxuries they had known and live in basements of abandoned buildings or modified storage containers that aren’t equipped to keep warm during the winter.

There is a huge need for disposable diapers in these camps. The inability to wash reusable diapers, or old clothes used as diapers, had led to outbreaks of diseases and illness in children and families in the camps.

The Diapers for Refugees program started when William J. Murray, chairman of Religious Freedom Coalition, met with RFC’s Iraqi ministry partner and asked what the refugees were in most need of. The ministry partner explained how desperately mothers needed diapers for their families. In March of 2016, the Diapers for Refugees program made its first delivery of 160,000 diapers to displaced Christian families.