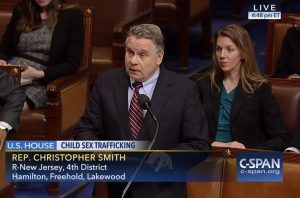 The bipartisan Iraq and Syria Genocide Emergency Relief and Accountability Act (H.R. 390), authored by Rep. Chris Smith (NJ-04), unanimously passed in the House Foreign Affairs Committee. This legislation will help those who have suffered at the hands of ISIS—and hold perpetrators of genocide, crimes against humanity and war crimes to account.

“ISIS has committed genocide, crimes against humanity and war crimes against Christians, Yezidis and other religious and ethnic minority communities in Iraq and Syria,” said Smith, who introduced similar legislation last Congress. “Many of them are now internally displaced or refugees and desperately need aid. Unless at least some humanitarian, stabilization and recovery assistance is intentionally directed to the survivors, many are them at risk of being forced to leave their ancient homelands forever. Some may even put their lives in the hands of human smugglers and attempt the deadly Mediterranean journey to Europe.”

Since 2013, Smith has chaired nine Congressional hearings on atrocities in Iraq and Syria, including one entitled The ISIS Genocide Declaration: What Next? and another entitled Fulfilling the Humanitarian Imperative: Assisting Victims of ISIS Violence. Last December, Smith traveled to Erbil in the Kurdistan region of Iraq to witness first-hand the plight of genocide survivors and see the humanitarian assistance the Chaldean Catholic Archdiocese of Erbil is providing with support from organizations like the Knights of Columbus to more than 70,000 Christians—1/3 of Christians remaining in Iraq—who escaped ISIS.

H.R. 390, co-sponsored by Rep. Anna Eshoo (CA-18) along with 34 other Members, includes key provisions directing the U.S. Administration to:

“Christians have lived in Iraq since the 1st century and only 250,000 remain, down from 500,000 in 2013, the year before ISIS began its campaign of genocide,” said Smith. “Yezidis have lived in Iraq since the 12th century and their population has dropped 20 to 30 percent from 2013. There are other ancient religious and ethnic minority groups targeted for crimes against humanity and war crimes that likewise need our attention and assistance if they are to survive in their home countries or at least the region. This bill will help ensure that survivors receive our aid and that perpetrators of crimes against them are held accountable.”