There are just some things people don’t talk about when it comes to personal sanitation. Diapers for example, are not mentioned much in American culture. Who wants to hear about the dirty diapers of someone else’s kid? In the Middle East diapers are never mentioned, which is 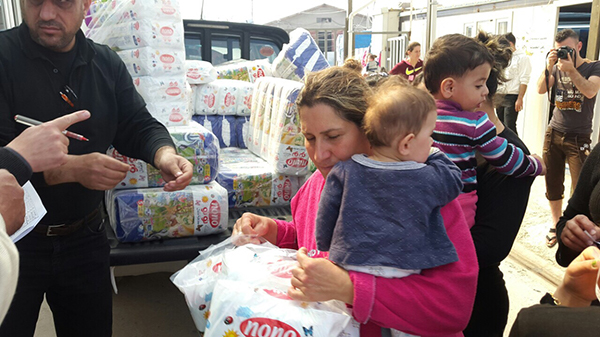 why the great need for them among Christian refugee families has been overlooked for so many years.

This is what I found out after learning of the need and investigating further. Mothers are using what are essentially rags for their babies. Anything from cut up old sheets and shirts, to the rags that are sold to polish cars. These are not the absorbent cloth diapers that are made for the purpose, so they often leak. Most of these makeshift diapers are washed out by hand in cold water, many times without any soap. Having a place to dry them can also be a difficult issue.

My first response was to try and supply cloth diapers until the realization hit me that in most cases there was no way to properly wash out the cloth diapers, and children would still get bad rashes and perhaps illness from them. In places where hot water is available we will furnish some cloth diapers, but for now the disposable type are most in need.

More than diapers: There are some other items that are also not talked about publicly but which I discovered are needed, such as women’s sanitary products. (Sorry men, but I just have to mention this.) These are expensive and needed. Also, there are some elderly and disabled people among the refugees, women in particular for some reason, who require adult diapers.

The Diapers for Refugees program is not yet mature. It took three years to build a network in three nations to provide thousands of children with a Christmas program and food for their families. Programs can’t be built overnight. Delivery and distribution has to be ironed out. Once a family is in this program we want to keep them in it until they can afford to buy diapers or the child no longer needs them. We just can’t pass them out willy-nilly. We have begun work on a specific Internet site for the program that will be available at www.Diapers4Refugees.org that will have reports and a photo gallery but that takes time to build as well.